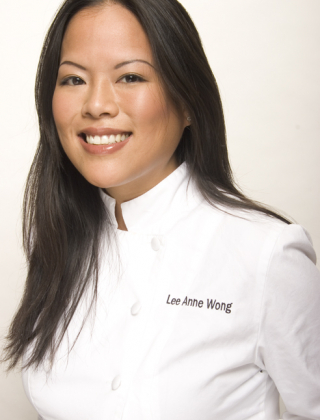 Since she traded her burgeoning fashion career for the culinary world, Chef Lee Anne Wong, has been bringing her modern-global fusion cuisine to the people. Born and raised in Troy, New York, Lee Anne, a 2nd generation Chinese- American, was not drawn to the kitchen, favoring sports –softball and ice hockey – instead. Though her mother encouraged her to eat unique cuisine, Lee Anne’s tastes were intrinsically tied to American favorites such as pizza, jalapeno poppers, and burgers. Lee Anne’s passion for cuisine ignited during her first year studying Fashion Design at FIT when she started cooking for friends. Once she donned her chef whites she never looked back.

After graduating from The French Culinary Institute (The FCI) Chef Wong jumped into the restaurant world. She immersed herself in New York’s fusion cuisine – working for several years at Marcus Samuelsson’s Aquavit, later serving as an integral part the opening staff at Jean Georges Vongrichten’s Chinese venture, Restaurant 66. She has also cooked and staged in kitchens all over the world, including The French Laundry, Charlie Trotter’s of Chicago, Nobu, The Four Seasons, Trio, Casa Oaxaca in Mexico and Cap Jaluca on the island of Anguilla– picking up global flavors and techniques along the way.

Chef Lee Anne Wong was a fan favorite on TV’s “Top Chef” series.  In December 2013, Lee Anne made the giant move from New York City to Honolulu, HI, to open up Koko Head Cafe, an island style brunch house. Her first cookbook, Dumplings All Day Wong, will be published this August 2014. Whether via TV, web, in print, or in person, Chef Lee Anne Wong will continue to bring her global cuisine to the public as she explores new, exciting areas of the culinary world. Visit kokoheadcafe.com